This year the group is celebrating its’ twentieth year of existence and the production of five books.  Twenty years ago we didn’t envisage that that we would still be going or achieve this.  In 2001, we were down to 4 stalwart members from about 7 or 8 that Jeremy Saunders encouraged in his home back in 1996 and we four produced the first Spencers Wood book. Considering our naivety, we were very proud of it and it sold out very quickly and we resolved to write another one or two about the local school and church, for their centenaries. Both organisations were established in 1908 and because we thought that St Michael’s would probably have their own ideas for their celebrations we approached Lambs Lane School first with the idea of a book, for theirs.  They were most encouraging and we were able to access many old papers and books, to write up their 100 years’ history. St Michael’s story has had to wait until this year and is included in our latest book about the village.

To raise funds for the first book we held exhibitions and film shows in the village hall and the library. One exhibition, in 2005, was badly attended because that was the year that Prince Charles married Camilla Parker Bowles having changed it from Friday to Saturday, the Grand National was run as well and as the rugby was on at the Madejski Stadium, it was very quiet. On this occasion we were joined with Beech Hill residents who were writing their own history book having been inspired by our first book. They included Mary Wheway, who was promoting her own book about Beech Hill Baptist Chapel.  The success of the Lambs Lane book resulted in Ryeish Green School, as Oakbank was called then, asking us to write a similar book for their centenary in 2010.  Again, we had much help from the school but we were hard pushed to get this out in time for the celebrations which were wonderful.  A red letter day edged in black, as the school closed shortly afterwards. We have a record though.

The first book was written by various people and the chapters or articles were dedicated to them. This style is echoed in our latest book. Barbara Debney was the first editor. The two school centenary books both ably produced by Mary Wheway, herself an ex-teacher, were written by different people who each took a different decade or two to write about. These two books are therefore similar but not the same.  The Three Mile Cross Chapel book was written by Patricia Green and edited by Mary Wheway having been commissioned by the chapel in memory of one member. We have more copies of this book, available.  Mary now has three of our books to her credit.  Our latest book is edited by Catherine Glover which means a different layout will appear but it is in the style of our first book with chapters written by different people and credited so.

We have been fortunate in that our members, ten in total, are still enthusiastic about local history and we have many talents within the group with so many skills being brought to the table. As the numbers changed so the dynamics have and we have developed in computing, internet, with thanks to Jeannie Brice for our website, editing, presenting, interviewing, selling, ideas and history, and thanks to Lesley Rolph –  regular contributors to St. Michaels Christmas Windows.

We have collected artefacts on the way such as items from Spencers Wood Chapel which the Parish framed for us, a tablet from the Chapel about the Institute, a plaque from Three Mile Cross Chapel, two 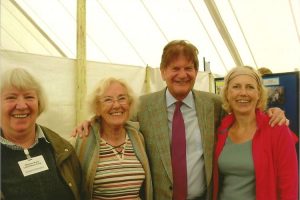 banners from Spencers Wood WI, a shirt and cap from Spencers Wood cricket club, banners from Ryeish Green school, many deeds copied, with some originals, historic view plates, some catalogues, school magazines and reports, many photographs, posters and leaflets.  The list goes on and on and we welcome anything we can keep to enhance our history.  We have many ideas as to where we are going.

We like appearing at St Michael’s fete and the Carnival and one year we appeared at eight venues; that was exhausting! We are pleased with our efforts and are looking forward to the next twenty years.