The earliest settlement in the Shinfield/Spencers Wood area was in Anglo-Saxon times and Domesday book records that the land had been held by Sexi from King Edward the Confessor. The report of the late eleventh century continues: 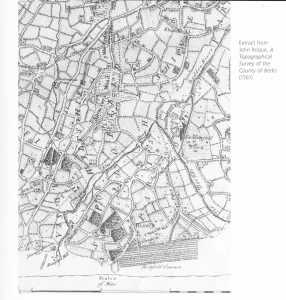 There is land for six ploughs.  (There are) eight villeins and five borders with

seven ploughs. There are two serfs and a mill worth five shillings and 150 eels

to render ninety swine. It was (formerly) worth seven pounds, now eight pounds.

This was an insignificant area on the western edge of Windsor forest, with the River Loddon its main asset. The church at Shinfield and any early village settlement on the well-drained land nearby would have been the local centre. Villagers were bound to the open field farming system where each man had scattered strips and all had to cooperate in deciding the rotation of crops and sharing the oxen to draw the plough. Until the middle of the fourteenth century most men were also bound to the lord of the manor to work his land which was in the east of the parish, away from Spencers Wood. In 1229 the king had sold some of these lands to Geoffrey le Despenser, whose name may be the origin of ‘Spencers Wood’. The Black Death and recurrent plagues during the fourteenth century created a shortage of farm labour and made the opportunity for labourers to rent their own farms. In due course increased prosperity lead to more independent farmers, and the emergence of tradesmen to serve their local community.

However most people in rural areas like Spencers Wood lived in great poverty and this became an acute problem during the late eighteenth and early nineteen centuries. The Poor Law was intended to help and the Overseers of the Poor were appointed to deal with poverty among their communities. Substantial farming families like Pither and Body cared about this, made decisions and paid much of the poor rate. One scheme started in 1700 was to provide land or parish cottages on the edge of the common at Spencers Wood where families could have room to grow vegetables and keep pigs and geese, but life was still hard there. In the 1770’s a new workhouse for the poor was built at Great Lea Common just north of Spencers Wood. People hated having to go to the workhouse, and preferred to take ‘outdoor relief‘, in which the Overseers provided items like ‘a truss of straw to lie on’, shoes, smocks, or coals for the truly destitute. Many families living in Spencers Wood were very poor, which does not feature in the writings of Mary Russell Mitford in the first half of the nineteenth century. She wrote ‘if anything be ugly you strike it out’, which was following the tradition of Jane Austen and Charles Lamb.

However she does record the trades that catered for the local people – blacksmith, butcher, and bootmaker for example. Also she relates how the main roads through Spencers Wood were surveyed by Mr McAdam  who decided that the low road – Woodcock Lane –  was less suitable than the road along the higher ground for his new system of paving. Improvements from tracks to paved road surfaces made a great difference to movement between communities.

By the end of the nineteenth century the trades listed in the census returns and the directories list more trades catering for a wealthier population. Spencers Wood had been farmland in 1872, and continued to supply food which now could be taken on improved roads to the quickly expanding town of Reading. Much of the better drained land on the hillsides of Spencers Wood was used for market gardening and orchards.