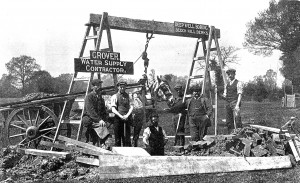 WATER ONLY FROM WELLS

There is a well in front of a property in Three Mile Cross. It is not used now, but less than eighty years ago, many homes locally relied on getting all their water from wells. The 1871 Ordnance Survey map shows eleven wells in this area which were probably those for communal use. The geology here is London Clay, hard, sticky and relatively impervious, which is overlain in places by gravel beds through which rain percolates. Valley Gravels occur on wet land near the Loddon and around Hyde End Road roughly from Sussex Lane to School Green, while Plateau Gravels lie on the drier high ground especially around Basingstoke Road. Wells were dug in the clay, but the gravel sites were easier to excavate and flowing water would be found there. (The nursery rhyme is correct in making Jack and Jill go UP the hill to their well.)

Private wells were dug sometimes at the edge of a property near a small stream or ditch, or they were put by the side of a cottage, even inside the kitchen where water was pumped up to a basin or sink. Outhouses for laundry, cooking or making ale often had a well in the floor. An important communal well was on ‘The Common’, opposite Spencers Wood Post Office. It was at a dip in the ground, and the head fittings with the pump and its enclosing shed were still in place in the 1980’s. Local families remember their parents collecting all their water here. Evacuees from London in WW2 recorded their astonishment at such primitive conditions!

Digging a well was a complex and potentially dangerous job. We have a photo showing six men with their horse and cart from Grover’s, ‘Water Supply Contractor’ from Beech Hill, with timber for shoring the sides as they dug, and bricks to construct the well. Bricks were shaped as wedges to form the circular outline, and it is probable that the brick works west of ‘The Common’ made these special bricks.

The Arborfield Brick and Tile Works provided hundreds of wedge-shaped bricks for many years. The well head would be a timber structure supporting the bucket and its winch. Later hand pumps were introduced to facilitate raising the water, often on routes between towns and near milestones. A farm in Grazeley still has a pump standing on the water supply line from a small reservoir through fields to the farm buildings. Electric pumps are now used where people have extraction rights to draw ground water for their gardens or animals.