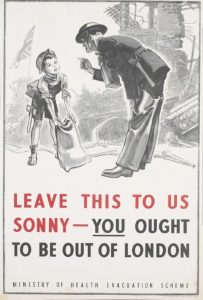 Thank you to the residents who have recently given us their memories, including war-time ones.

We heard about the family that lived in Church Lane, Three Mile Cross, where a bomb fell in the field opposite and damaged their house and they had to move out. Another bomb fell in a garden in Grazeley Road and blew off the front door of the house during the night while the family continued to sleep upstairs. We spoke to another resident who had been a child evacuee to Reading who was separated from her mother and younger siblings and housed with many different families and, at one time, even had to sleep in a garden shed.

The evacuee children from the London area came from Waterloo Station to Wokingham, where they were transferred to coaches for the rest of their journey to Spencers Wood. They each had a small case and the all-important gas mask in its box, fastened with string round their necks.

The outbreak of the Second World War in 1939 caused a halt in the installation of main infrastructure services. Spencers Wood remained a rural village, causing amazement to the evacuee children who were sent from London and other cities. It was a shock to find no electricity, no piped gas, no running water. Dotti Johnson who was 7 when she came to Spencers Wood told us: “The grey stone cottage was without sanitation or running water. Drinking water came from a well in the back garden. Lighting was obtained by oil lamps and candles. Cooking was done by a small kitchen range.” Many houses had wells in their gardens or in their outhouses where fresh cold water could be pumped directly into a sink.

There were no street lights, and the wide starry skies sometimes over-awed the city children. However, they generally loved the freedom of the countryside, exploring and playing in the many surrounding fields and woodlands and picking fruit, nuts and flowers according to the season. Schooling was shared with the village children, and some teachers came with the evacuees. The resident grown-ups (all able-bodied men were called up into the armed forces) often felt that the village was over-run with children, and they arranged many concerts and other activities in the village hall. These delighted the youngsters. We have records from evacuees saying that this was the happiest time of their lives.