This week, a news cutting was unearthed about John Arlott, the writer and sports commentator, who lived in Basingstoke and supported Reading Football Club. As “Redd’n” (as he described it) was only 16 miles away he would, as a child, cycle a saddle-sore, ninety minutes each way to Elm Park, on holiday, Saturday and evening matches. The matches would cost him 6d (2.5p) to go through the turnstile and occasionally he would purchase a bottle of fizzy lemonade for 3.5d (1.5p) with 1d deposit on the bottle, refunded on return, from the little general store in Spencers Wood. The article doesn’t name the store but was it London Road Stores or was it Farley’s?

We have recently received some local history photos from Brian Farley in Australia who tells us that his grandfather Charles Tucker Farley had a grocery store in Tilehurst and his eldest son, Frederick operated a store in Spencers Wood. Brian’s father, Albert, also worked with Fred at Spencers Wood and he is the young man by the cycle in the picture shown.

Albert would use his bike to cycle to Farnborough as his first love was aeroplanes. In circa 1920, Fred emigrated to Austrialia where he opened a hardware and grocery store. Albert followed him circa 1923 and went into aviation.

Brian is planning to visit Spencers Wood in September and we hope to be able to give him further information about the store.

We know that Farley’s was there from 1911 to 1920 and was taken over by Rodney Harrison and Sons until the mid 1960’s. We also know that Joyce and Barry Duxbury, who ran the local Post Office later on, ran Harrison Stores. They were followed by the Gill family and in February 1998, the store became Rankins the chemists. 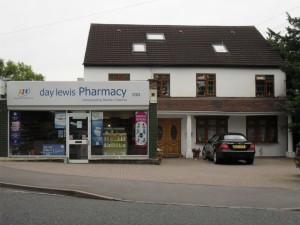