So many farms are named on twentieth century maps of Spencers Wood that you would guess that they had to be small individual holdings. Indeed the land is not particularly suitable for extensive farming. The steep slopes down towards Grazeley and the poor soils generally are often wet and were difficult to cultivate. The Enclosure Acts formed the small regular fields as late as 1864. By then there was improvement in farming methods and machinery, and an urgent demand from the growing population of local towns for fresh food.

Farmers could supply and transport milk, fruit and vegetables as well as fresh meat to Reading and even to London by train on a daily basis. For a time farming was reliably profitable, and a farm owner could make a decent income. Some village farms belonged to an owner who lived elsewhere with larger land holdings, and the farm here was run by his tenant. The owners of other farms lived on the land and either farmed themselves or had labourers working under the direction of the bailiff or farm manager. The ‘gentleman farmer’ was an important person in local society.

This variety led to a mosaic of arable and livestock farming. There were dairy farms, orchards, soft fruit farms, pig and poultry holdings, and growers of flowers and general ‘market garden’ producers. Goats were kept by the Red Lion opposite the post office. Local businesses developed to support these farms: the farrier, saddler, the local abattoir, the carter, vehicle maintenance and tool suppliers and repairers.

Individual farms could change hands quite frequently. Sometimes the farm name did not change, but often it took on the new owner’s name. Mullins Farm on Basingstoke Road is named on the first and second (1871 and 1900) editions of the Ordnance Survey maps, but by the 1911 edition it is called Body’s Farm. It retains that name to the present day. Farming was a widespread activity in Spencers Wood until the second half of the last century. Then pressures for housing and rising land prices resulted in the changes we see today. Eventually small scale farming could not last and houses, infrastructure and solar panels stand where fields and hedgerows once marked the farmland.

The History Group has information from some residents, and from varied sources such as Mary Russell Mitford writing in the 1820’s, and the Government Agricultural Census taken during World War II. We would be interested to hear from anyone who can tell us more about farms and farming in Spencers Wood.

We regularly have History displays at the Spencers Wood Village Carnival, St. Michaels & All Angels Church Fete, and in fact the first “event” of the year, the Shinfield Parish Council Meeting being just around the corner in April.

Our objective for attending these events is not only to support the local community, and raise awareness of our group, and perhaps to sell the odd book or two, but often we talk to people who share their memories with us.

This is such a rich source of information for us that much of the text of our previous books has come from such events.

We recently added in something for the less senior amongst our community too, to let the younger generations know about farriers, old beer bottles and pre-decimal coins! It’s amazing how fast the world changes.

At Spencers Wood Carnival last year, we were given a very precious gift that this individual must had taken hours to develop. We want to share it with you. It’s a very detailed map (not to scale) of his memories of 1968, and the Spencers Wood Bakery – then called Philpotts.  He also gave us some pictures that show how rural the village was still then.  See what you think! 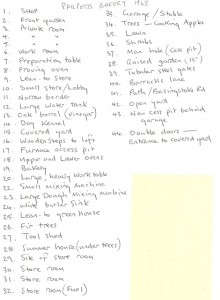 Do you have any photographs, with your precious memories,  that you would like to share with us?

Signpost showing the way in 1968

Thank you for helping us to preserve the history of Spencers Wood for future generations! Maybe we’ll see some of you at our future events in the village?

I have recently been reviewing a report of 1938 found in the Record Office about some of the properties then owned and rented out by the Hunter family of Beech Hill. They owned several farms, including two next door to each other – Sheepsbridge Court Farm and Body’s Farm.  The Group recently had an enquiry about Body’s Farm and I can tell the enquirer that it consisted of 100 acres and 30 poles and was rented out for £88 per annum.

Body’s Farm had an attractive farmhouse and was in the hands of a young and hard working tenant, name unknown.  The old cowshed was adapted from an old timber built corn barn.  (This could have been the barn that was consumed by fire in the 1990s.)

Sheepsbridge farm was a dairy holding with some arable farming consisting of 222acres 2 roods and 4 poles with a rental of £244.15 shillings (£244.75p).  It had a modern cowshed but the rest of the buildings were dilapidated and old.  Much of the thatch roofing required renewing.  The Hunters considered selling this but finding another farm for the tenant made it unviable.  As an alternative the holding could have been put to Body’s next door.    If sold the farm would have to realise £4275 in order to obtain an income of £150 per annum from the invested proceeds.

White House Farm was described as an attractive holding and that negotiations were afoot for the transfer of the tenancy.   Milk production accommodation was not good and the present tenant erected his own bale (a portable dairy house built on wheels or skids).

Two other farms were at Beech Hill but one of the smaller holdings was a pair of semis in Kiln Lane.  This is my home now and the report says that they are old and the brickwork perished.  Obviously damp despite a partial insertion of a damp course and many roof timbers appeared to have perished.  From a superficial inspection the report said that further expenditure should not be made to render them habitable.  In fact the Local Authority might take action under the Housing Act of 1935 but the cost of carrying out their requirements would render the scheme uneconomical, despite one of them being occupied.

The report goes on to say that all rents were paid up to date and the tenants appeared to be satisfied.  All the estates were largely agricultural but Sheepsbridge Farm was wholly agricultural. Proposals were made to build on Body’s Farm to a density of 4 houses per acre, and Whitehouse Farm only, including the allotments, to a density of 6 per acre.  The allotments became Diana Close in 1997 but the farm was restricted by the Planning Inspectorate which allowed Warren Croft to be developed in recent years. Body’s Farm has not been developed.