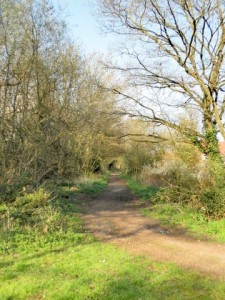 Woodcock Lane is an ancient track in Three Mile Cross, passing south between the villages of Three Mile Cross and Grazeley. It lies in the Foudry Brook valley and skirts the hills rising to Spencers Wood. The Lane is shown on old maps and is named on Roque’s map of 1761, and Thomas Pride’s map of 1790. It is possibly named after after an old manorial family living in the area. Local land formed a detached part of Wiltshire until the county boundary revisions of 1884.  In mediaeval times, lands were passed by kings to favoured religious groups and temporal knights, and just as land around the former Battle Hospital in Reading belonged to Battle Abbey, it is recorded that Robert Woodcock of the Hartley Battle estate paid dues to the Abbot of Battle in the fifteenth century.

The Lane at one time lead to a modest manor house, Woodcock House. Three Mile Cross was a busy village community even before Mary Russell Mitford wrote in the 1820’s and 1830’s her series of famous articles later published in the book ‘Our Village’.

She describes the lane with its trees and wildflowers. In wet weather the track becomes muddy, and people preferred to travel up the hill to the south where the ground was drier. The author tells of seeing John MacAdam surveying both routes, to decide which to pave as the main road between Reading, Winchester and the south coast ports. It was decided to tarmac the high road, and Woodcock Lane became a quiet green lane. Mary Russell Mitford chose to walk along the lane when she moved from Three Mile Cross to live in Swallowfield, sending her luggage by cart on the high road. 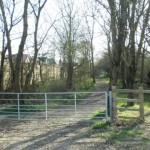 Photographs and drawings in the late 19th and early 20th centuries show the Lane as a wide grassy track bordered by tall oak trees, with a double line of the trees on the east. Only a few old trees remain, and new younger growth surrounds the path. Land adjacent to the ‘low road’ was chosen for the A33 by-pass, leaving Woodcock Lane intact but subject to the noise of  traffic. However, the Lane is a bye-way and footpath, and can be followed south into Hampshire. Within Shinfield parish, it is part of Parish Walk no.5, going along Woodcock Lane, up through wooded hillsides to Spencers Wood and back across fields to Three Mile Cross. 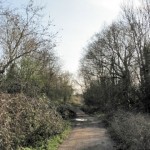 Walks leaflets are available from post offices, the library and the parish office as well as on the parish web site- The one for Woodcock Lane can be found here.