Born in Alresford in Hampshire in 1797, Mary Mitford lived most of her adult life in Three Mile Cross. In 1851 she moved to Swallowfield where she died in January 1855.  During the first half of the Nineteenth Century she was a well known local figure participating in local literary and social life in Shinfield and Reading.

Her family inheritance was squandered by her father and she was forced to earn a living to support herself and her parents through her writing.  She first came to attention through her poetry before becoming a successful playwright but she is best known today for her sketches of village life, originally published in The Lady’s Magazine before being collected and published under the title Our Village. Still available today this is a great resource for all interested in local history, packed with accounts of local characters and the countryside she loved.

Below are a number of pieces written by Group members, many of them first published in the Loddon Reach magazine.

Three Mile Cross was crowded with vehicles causing traffic jams almost 200 years ago when visitors jostled to meet the writer living in the cottage by the pub. Mary Russell Mitford was the famous author of plays that were performed in London and New York. While at school in the Abbey Gateway she had enjoyed writing poems and sketches and later joined literary society gatherings in London. Her father, a very extravagant gentleman, was deeply in debt and Mary wrote plays in order to provide for her family. In 1820 when she travelled to London (a whole day’s journey in a borrowed gig) to stay in Greatt Queen Street near Covent Garden, she saw an opera, visited other friends and went to Pope’s Grotto, Strawberry Hill, Hampton Court and Kew Gardens.

Women writers were scarcely tolerated and their work was usually rejected out of hand. However Mary was encouraged by Thomas Talfourd (later MP for Reading) who advised her in dealings with the temperamental actor managers. She started her first play at the end of 1820. In 1821 Talfourd came to Reading to attend elaborate ceremonies hosted by Dr Valpy. Mary attended, and a special toast was raised to her. During the next fifteen years Mary was involved in writing her plays and going to London for convoluted discussions with  producers and actors. Her works were successful and two transferred to New York.

She was linked with Covent Garden and Drury Lane Theatres. The latter was the fourth on that site, and by 1820 it had gas lighting, could seat some 3000 people, and the new portico was built on Catherine Street. It was considered ‘a centre for national culture’ and famous actors such as Macready, Kemble and Cathcart performed in tragedies based on Italian operas, written by English authors. The Local History Group has copies of playbills for two of Mary’s plays when they were performed in Reading. On May 8th, 1829, ‘Miss Mitford’s celebrated and highly-admired Tragedy of FOSCARI’ was presented, starring Mr Cathcart at The Theatre, Reading. Tickets were available from Mr Barnett at Mr Sweetman’s in the Butts. On May 22nd, 1829, was performed ‘Miss Mitford’s splendid production of RIENZI, as performed at the Theatre-Royal, Drury Lane … with unceasing attraction and universal approbation’ , again with Mr Cathcart in the lead role. Seats cost 3shillings for a Box, 2shillings in the Pit, and 1 shilling in the Gallery.

In the 1830s, Mary concentrated on writing for journals and magazines. She became more famous, and had more visitors to contend with.

The Dramatist from Three Mile Cross 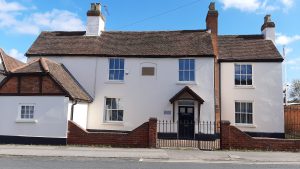 London life was bustling in the 1820’s. The Napoleonic war was over and literary salons, theatres and opera were bright with talent. Mary Russell Mitford was a well-liked member of the social scene, writing poems and small dramatic sketches. Then in four years she wrote four full-length plays which were performed at Covent Garden and other London theatres, and transferred successfully to America.

Famous actor/managers like Kemble and Macready were eager to appear in her works. She had turned to writing for commercial productions when her family became very poor and moved to live in a small cottage in Three Mile Cross. She had to provide their sole income. Her plays were termed ‘poetical tragedies’, generally set in five acts and based on historic characters. The final versions of the plays were settled through discussions with the main actors and Mary spent many days in London attending and directing rehearsals. There was a renewed interest in southern Europe after the wars, and Macready encouraged her work on the first play, ‘Foscari’, a Venetian Doge. In 1821 it was ready to go into production when Byron announced that he too had a play about Foscari. Both works were shelved.

Mary had to turn to another subject and by 1822 her second play ‘Julian’ was written and accepted at the request of Macready. In 1823 it was performed at Covent Garden. Mary was paid £200, to her great relief. Next she wrote ‘Rienzi’ which had enthusiastic audiences and for which she received £400 for the production, and also the profits from the sale of thousands of copies of the printed play. She then wrote ‘Charles I’. This tragedy was thought to be too near to current politics by the Lord Chamberlain, who refused to give it a licence. Meanwhile it had been realised that Mary’s ‘Foscari’ covered a different scenario to that of Byron’s play, which had been considered inferior and had been withdrawn. Kemble promoted Mary’s play, and her version was produced on stage in 1826.

Mary’s influential friends wanted ‘Charles I’ to be seen on stage, and in 1834 it was produced at the Victoria Theatre, south of the Thames and outside the jurisdiction of the Lord Chamberlain. Again Mary supervised rehearsals, working with the leading actors to prepare the final version of the text. This was Mary’s last stage effort because by then she was earning more money and fame from her articles in The Lady’s Magazine.

There is a book in Spencers Wood Library entitled Records of a Friendship between William Harness and Mary Russell Mitford.  The book is based on correspondence between the two.  For the last four years of her life, Mary moved from Three Mile Cross to Swallowfield.  Having been always keen on village education, Mary had wanted to establish a school for the local girls.  She had already suggested a scheme for creating a rural Library whereby her friend, Mr Lovejoy, a book seller of London Street, Reading would travel around the villages with books, but this didn’t come to fruition. Mary then set out her ideas in a statement to William Harness and should anything come from it then he should be prepared against the evils to come from it.  Mary said that girls would rather work in the fields for 2 or 3 days a week with tea, bread and butter than be comfortably housed and fed in decent servitude.  The local rich would also prefer this as girls were cheaper than boys to hire.  The way to overcome this was education, advocating household work.  Religion was also required whether they were dissenters or members of the established church and they must attend Sunday Service.  The girls also needed to know about the wider world and English history.  Mary, though, deprecated singing including hymns. Other friends came to help in the scheme namely Charles Kingsley of Eversley (living at Farley Hill) and Hugh Pearson, the Rector of Sonning.

Just as Mary had finished setting out her ideas, Mr Watson, the curate announced that he had received nearly £1000 for the school scheme proposed by the Russells of Swallowfield Park, which Mary scathingly called a Dame School.  Mary argued that the school could just as easily be built in Shinfield for the girls there.

The Russells’ school went ahead, opening in December 1854.  Mary indignantly describes it as being built over an old dunghill of a farmyard which they had taken into their Park and will make it serve as a lodge.  ‘They had only an ignorant young woman and Miss Priscilla for teachers, took none but small children, make them pay so much per week, clothe them in a shabby uniform and make them pay for it!’  (Mary had imagined a school for all ages including an evening school for adults.)  It was shortly after, in January 1855, that Mary died.  There was some talk of naming the school after Mary but no, it was called Sir Charles Russell School. A proposed school in Three Mile Cross that didn’t materialise was also to be named after her.  Although, when Ryeish Green School opened in 1908, that too, was suggested to be named after her that too didn’t come to fruition.