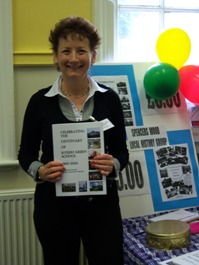 With the success of the Lambs Lane book, and the centenary celebrations of Ryeish Green School in 2010, the natural next research item was the history of Ryeish Green School. This time though we had a deadline… only 18 months to research…! Sadly as the school was also closing, it did mean that access to documentation was relatively easy as they were sorting out their library.

On Sunday 2nd May 2010, Ryeish Green School held its Centenary Celebrations – It was a truly amazing day and we were privileged to be part of it. You can see the article we submitted to Loddon Reach on 22 June, by linking to Our Blog – in which the group have all put their individual thoughts on the day. During the day Spencers Wood Local History Group sold its book – over 300 copies! There are still copies available at Spencers Wood Post Office, or from a member of the group for £5 plus p&p. 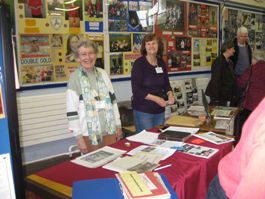 We had diligently researched the 100 years of the school, and read and heard some amazing stories along the way of cookery classes where they learned how to cure bacon. The recipe, if you ever need it is-
• 6 lbs Salt
• 2 oz Saltpetre 2 oz Blackpepper
• 2 lbs Sugar

A rural school when it opened in April 1910 with only 81 pupils, it finally shut its doors in July 2010.
During those years there have only been 6 headmasters/mistresses, people that reflect the local community, like Ken Robins who worked at Huntley, Boorne & Stevens to modern day famous people, e.g. Hayden Mullins, a footballer who played for Chelsea and then Portsmouth; Rebecca Cooke, a Commonwealth swimming winner and Steve Wicks, another footballer who had played for Chelsea, West Ham and QPR.

Jeny Garner the final Headteacher, from 2001, has written a very fitting introduction to the book.

Some of the proceeds from the sale of the book have gone towards restoring the memorials that the children had placed in the grounds for their colleagues who died during their school years. The group are working with the Reverend Beatrice Pearson to get them replaced in the St Michael & All Angels Church Grounds. Some have been donated to a charity which helps educate disabled children – The Treloar at Alton (www.treloar.org.uk) ;and the remaining funds are for the research and publication of the New Village book.