It’s more than a year since our last post.  Like so many other organisations the Local History Group has not been able to meet for many months but we are now up and running again.

Future events will be published on our website. In the meanwhile why not visit the People section of the website and read about the life of Pioneering Nurse Louisa Parsons, 1855-1916 who was buried in Shinfield after serving in Egypt, South Africa and the USA.

In reviewing our new book, it occurred to us that for such a small village which is expanding rapidly we are blessed with some lovely buildings and other assets.

We have the old United Reformed Church building now turned into housing as is the Three Mile Cross Chapel.  The memorial board commemorating the two world wars that stood in the grounds of the URC can now be found in the entrance of St Michael and All Angels church. 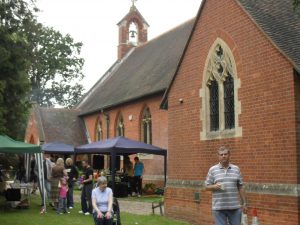 Another lovely building contributing to the village community which is thriving.   Next to this well-used church is the village hall which is held in trust for the residents of the ecclesiastical parish of Spencers Wood. We are so fortunate in having the hall which was given to the residents by Anna Hunter, in 1948, after her mother had given the use of the hall in 1911, in memory of Anna’s father, Henry Lannoy Hunter.   If you live within the church parish of Spencers Wood the hall is in trust to you. It cannot be disposed of without all the residents agreeing to it. The residents certainly make full use of it.

The other building of note in our parish of Spencers Wood is the Library.

This lovely building was first built by Frederick Allfrey to be used as a school.  On Allfrey’s death the school closed in 1915 and it passed to Allen who bought Allfrey’s estate.  Charles Allen then sold the school and school house to Berkshire County Council (BCC) and on the dissolution of the BCC the building passed to Wokingham District Council as it was then called.  Since that time the library has occupied the building and as such has been an asset to the village.  We should treasure it.

Another donation to the village by Capt Cobham was not a building but allotments and recreation ground in Clares Green Road as part of the enclosure of Shinfield in 1856. Although in Spencers Wood, they were given to Shinfield Parish.  The Rec’ is the only open space in Spencers Wood and is used by many including the history group.  By the time this article appears the Carnival will have been held there in September. Always a great occasion. 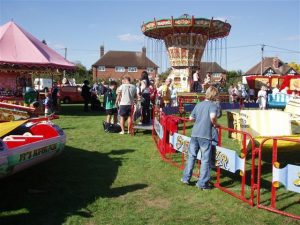 The three assets of the Village Hall , the Library and the recreation ground are all held civically by residents, Wokingham Council, and Shinfield Parish and are well used and loved. For more information see our new book.

With Christmas almost upon us again, the theme this time is simply Christmas.  There was a workhouse at Grazeley, which we hope to research.  Prior to 1834, Christmas day was the traditional treat for most workhouse inmates when they would receive roast beef, plum pudding, good cheese and a pint of porter (dark beer) each. But after that date, the Poor Law Union ruled that inmates were not to have any wine, beer or spirituous or fermented liquors unless ordered by the Medical Officer.

Some Unions disregarded this and celebrated Christmas in the usual way.  Despite the lack of Christmas fare the inmates were always given a day off on Christmas day, as well as Good Friday and Sunday.  Once Queen Victoria married Albert then Christmas took off in a big way with Christmas trees, cards and decorations of holly etc.  Eventually the Poor Law Commissioners relented and gave all Unions Christmas fare.  The culinary highlight was the plum pudding and the recipe for 300 people contained the ingredients of 36lbs of currants, 42lbs of sultanas, 9lbs of dates, 9lbs of mixed peel, 26lbs of flour, 16lbs of breadcrumbs, 24lbs of margarine,26lbs of Demerara sugar, 102lbs of golden syrup, 102lbs of marmalade, 144 eggs, 2lbs of mixed spice, and 13lbs of carrots.  These recipes were often published in local newpapers.  To go with the pudding, the inmates would have roast meats such as beef, veal or mutton with ale or porter.  Some places the inmates were given extras of tobacco, snuff, oranges and sweets.  After tea, which consisted of bread and butter with cake there often followed a magic lantern show.  Sometimes they would finish up with a singsong and some dancing.

In the period when Christmas fare was banned the usual diet would consist of gruel made from oatmeal, a small amount of suet, treacle, and salt or allspice.  Breakfast was usually bread and sometimes cheese as was supper also, with broth or gruel.  Lunch or dinner as it was called then, would consist of vegetables and potatoes with meat appearing only once or twice a week.  Supper was similar to breakfast and mostly bread.

There was a recipe called scrap bread pudding which has survived the years made from bread, suet or dripping, currants, sugar, ground ginger, milk and eggs.  It sounds quite nutritious but the quantities of other ingredients, compared to the bread, belies this fact.  Eggs were only used in recipes or given to invalids.  Perhaps your Christmas fare will be better than above.

Happy Christmas from all of us in the Group.

Early on in the 1900s, children didn’t have many outings, but tended to go to local places that were easily accessed.  The Library School children went to Grazeley in 1906 as the school treat. The Band of Hope had an outing in 1903 to Oxford when the whole school closed.

According to Rita Goodall who was a teacher from 1985 to 2000 and wrote a piece in our Lambs Lane History, one summer’s day, in 1978, the juniors were invited as part of ‘rent-a-crowd’ to welcome Prince Charles to Wellington Country Park. He visited to open the Dairy Museum.  After lining the route, the children were free to wander the Park.  One group were speechless when Prince Charles came over to speak to them when he saw them in the woods.    Between 1920 and 1939, there were many school outings and the children once went to Bognor, in 1930, by motors which were probably charabancs.  In the 1950s, coaches belonging to Smith’s took the children to places like Hayling Island, Southsea, or Brighton and sometimes to London.  In 1958, one class went to Portsmouth Dockyard to look over The Victory.  Some lucky children were taken to the Palace Theatre in Oxford to watch a ballet.

Ryeish Green School also had outings to London and they were taken to and from Reading Station by wagons and carts where there were two compartments reserved for them by the Great Western Railway.  Their exhausting trip took in Charing Cross, Trafalgar Square, Whitehall, Houses of Parliament, Westminster Abbey, Hall and Bridge, Science Museum, Embankment, Colonial Institute, Albert Museum and back to Paddington.

In Our Village of Spencers Wood, Elaine Stobo recalls a Sunday School outing to Frensham Ponds in around 1952, for a picnic.  Rev Lewarne was the vicar who accompanied them.  There was panic on congregating to return home the only person missing was Rev Lewarne.  Nobody knew where he was and one coach load of children returned alone with the younger children on board.  Mr Lewarne eventually turned up an hour late.  Marion Pyke said that the water was orange, probably from some iron content and that the children’s legs were stained with it. Marion suspects that the public is not allowed into the water these days. Notice from the photo that the girls tucked their dresses into their knickers as they were apt to do in those days!

Margaret Bampton.  The above was taken from our history books.